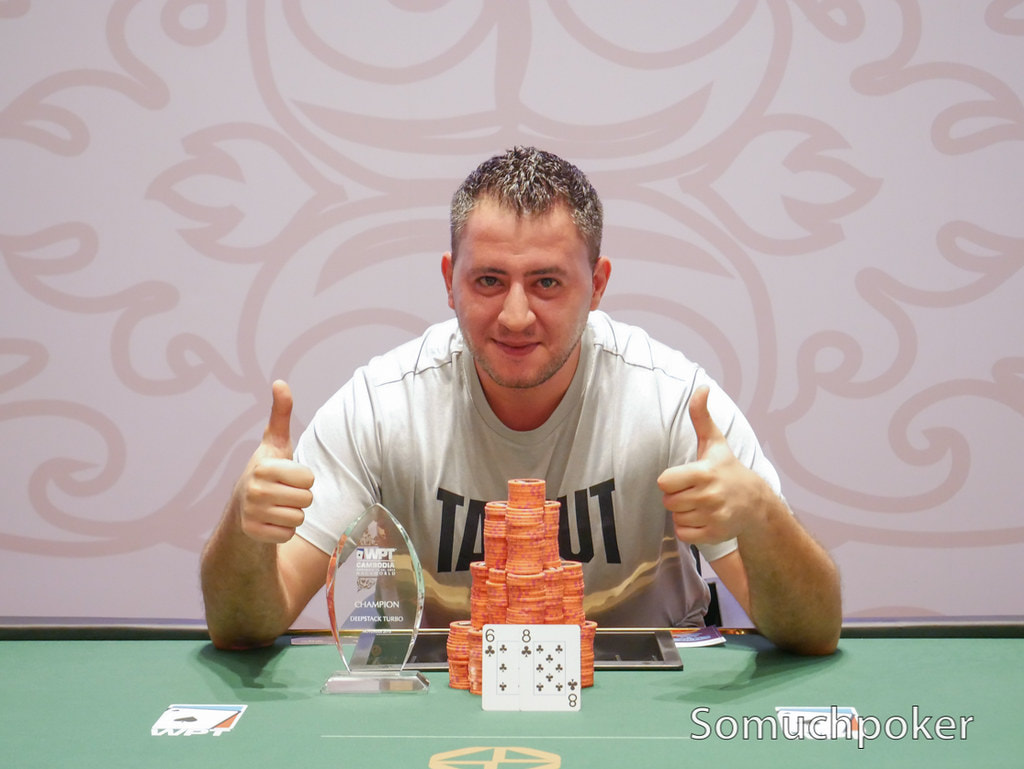 Nagaworld was the first poker room I ever played in Cambodia when I first arrived over five years ago. I checked into my hotel around midnight in a completely foreign land and quickly headed to the poker room thereafter in order to put myself in more familiar surroundings. Over the next few years I spent about half of my live sessions at the casino, but this was in spite of the many problems they had. Anyone who has lived in Cambodia for a length of time is all too familiar with the inept “managers” who could not manage a game to save their lives and dealers who got out as little as 10 hands every 30 minutes. But much has changed at Nagaworld in the last couple of years as they have installed a dedicated room manager and an entirely new staff including the dealers. From a room that once spread only 1 or 2 tables of $1-$2 no limit hold’em, Nagaworld now boasts a room that spreads 4 to 7 tables daily of stakes ranging from $1-$3 hold’em to $5-$10 and on some days even pot limit omaha.

The difference in the quality of the management staff is night and day when compared to previous years. It used to be that the casino ran the poker room with managers that were dragged in from other games and did not know much about poker. Tables would often run unbalanced, dealers not held accountable for mistakes and questionable rulings were made constantly. Things quickly changed once they installed a dedicated poker room manager, a man with experience from Las Vegas both as a dealer and floor manager. A standardized set of rules were put in place for both the room and players along with a competency to manage tables properly. Getting a seat or being put on the wait list was an adventure in previous years. But now the poker room is on the Poker Atlas app and one can expect and orderly and coherent system when getting seated in a game. My only complaint would be that when the main manager is not present the other managers do not pay enough attention to the dealers, who while much improved still require a certain amount of supervision.

Once upon a time the dealers were the biggest issue at the casino poker room. They were rotated in from other games and on some nights a dealer would be in the box that had never dealt a single hand of poker before. But with the new management staff came more training, more accountability and dealers that were dedicated to the poker room instead of other games. On my last visit the dealers were getting out just under 20 hands per 30 minute down on average, which is a vast improvement from previous times. They take rake correctly and efficiently and seemed to be able to handle most requests from players such as seat and table changes. This is not to say that they have completely arrived as they still have a bit of ways to go before being considered great dealers. On the last table I played I witnessed a few things that the dealers seem to let go or pay little attention to. There were a couple of players who would constantly act out of turn to which the dealers said nothing. And one particular player kept talking about what he folded after the flop had come out and once again the dealers seemed to not even notice. When our table switched to omaha, a few dealers had trouble counting the pot and would often require a second dealer or a floor manager to stand by them to assist.

The rake system is a bit of a point of contention for me when it comes to the Nagaworld poker room. Some may already know from my previous writings that I am a proponent of a 10% capped $5 rake. The alternative would be to use a 5% capped $10 system but both are really two different ways to get to the same point as they take about the same amount in commission hourly. But the former taxes smaller pots more heavily while the latter does not take much on small pots but takes more on bigger pots. What Nagaworld has instituted is a 10% cap $5 system, but with an added level of a $10 take when the pot reaches $200. So in other words, the higher percentage allows them to rake smaller pots, but they also take more on bigger pots with this added level. The two systems were not meant to be melded into one and I would personally prefer that they choose one method or the other. The room also takes an additional $5 every time two players who are all in wish to run it twice. I understand that running it multiple times takes away from the speed and pace of the game and the room is merely trying to compensate. While I would not mind this extra rake to be done away with entirely, I would at least like to see a reduction in the amount they take as $5 seems a bit much. All this having been said, I should point out that the floor managers were quick and reasonable when applying rake reductions when the game got short. The concept of a discount is not a very familiar one here in Cambodia, so to have managers acknowledge that players keeping a game alive should not be punished is refreshing to say the least.

In terms of comps and promotions I feel Nagaworld has reached a good balance between being generous with players but not so much as to create a nitty environment. Keep in mind that comps were something that did not even exist previously so anything offered is a nice change. Currently the room offers hourly comps on players cards much like Vegas does. The rates are as follows:

Being able to eat from the casino restaurants for a reasonable price was always an issue when playing poker at Nagaworld previously. The new system in place solves this issue for the most part and allows players to either eat for free or at the very least receive a significant discount for their time playing. The room also offers a rake reduction to a cap of $5 on all games from 10:00 AM to 5:00 PM. It used to be that games at Nagaworld would only start at 8:00 PM nightly. But with games running during the day and sometimes going round the clock, the rake reduction promotion is both appropriate and welcomed.

At the end of the day one cannot beat the foot traffic of a casino when it comes to a poker room. The poker room is well placed near restaurants and other games in the casino to attract the random punter who often sit to provide the games with action. This is why Nagaworld is consistently able to offer games of varying stakes as the room attracts players from different and diverse groups. The games are not great every night, but chances are always better when the room is surrounded by those looking to take a break from baccarrat or the slot machines. Other games are available upon request such as short deck and omaha. The fact that the latter runs semi-regularly is a modern day miracle and a testament to just how far the management and staff have come. The game is not run perfectly, but it runs fairly smoothly and I did not have too many complaints the last time I sat in this game. It used to be that omaha could only be found at one other location so having another option is always a welcome change.

The poker room at Nagaworld has recently begun both a weekly and monthly tournament to meet this demand in Phnom Penh. The weekly event is run every Saturday at 1:00 PM and the format is as follows:

The inaugural event was this past Saturday and it went off with 25 entrants and a prize pool north of $6,000 USD so they seem to be off to a good start. The first monthly tournament will be on March 7, 2020 and the format is as follows:

And do not forget that Nagaworld hosted the recent World Poker Tour Cambodia to record numbers for this region. I was told that this would be a yearly event and that other major tournaments should soon follow.

Given the rate of improvement I think it is safe to say that the poker room at Nagaworld will soon become a true destination spot for poker players all around Asia. While they still have a ways to go to become something on the level of Macau or Vegas, the management seems to work tirelessly towards such a lofty goal. The casino itself has improved vastly over the years with many options for dining and entertainment and should be on everyone’s list of places to visit when coming to Phnom Penh. With recent improvements the poker room has only added to the growing and improving environment of the Nagaworld Casino.