This year I planned to do more charity work. Playing poker professionally is tough, especially when you don’t know where your income is going to come from. You already have a difficult life trying to manage your bankroll, and especially in tournament poker, you can go on long droughts and even negative months. But having traveled and even lived in some places like Vietnam, Philippines, India, Pakistan, etc I feel that I am very fortunate as I am, and I get to play the best game in the world for a living. In order to motivate myself to earn more, but also to give purpose to what I do (other than making money), I pledged 10% of my income to charity work.

In January, despite making a loss, I made a donation to the Saigon Children’s Charity. A very good cause for less fortunate kids in Vietnam. In September and October, although I struggled throughout but I had a decent result at the end so I forked out (more than 10% actually). I say this because I don’t want some of my asshole friends not seeing the positive side of things and actually spinning this into “oooh so you’re rich now, I don’t have to pay you back”… To be honest, I am not doing so well lately but I want to stick to my pledge and it means even more when the giving actually “hurts”. Kind of. 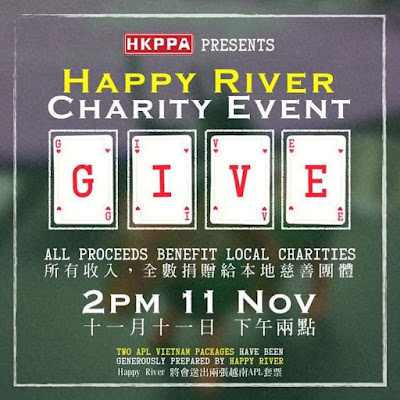 HKPPA (Hong Kong Poker Players’ Association) actually came up with a great idea, for me to sponsor two main event packages (buy in and hotel) to the upcoming APL in Vietnam, which includes 4 days to spend with me, which is always worth it LOL. In the end we generated a total of HK$21000 which will be distributed to the Homeless World Cup (HK), The Hong Kong Society for the Aged and the Hong Kong Children’s Foundation. Not only that my money generated more for charity than expected, I hope to inspire other players to give more. I hope it can become a practice and even tradition in the poker community.

In the end, the prizes were won by Mr ChuChu and Zack so congratulations to you both and I look forward to seeing you guys in Vietnam. Both winners if they cash in the main event, will give 10% of their profits to charity as well! So pay it forward!