Each tournament will have a different speed. The speed of a tournament has 3 components:

Why does the speed of a tournament matter?

For the host, a faster tournament means they can free up dealers and tables for other tournaments and cash games. Also, the tournament needs to fit in with their schedule and location operating hours.

For the host, a slower tournament means they can attract more talented poker players from all over who want to show their mastery of the game over many days of play.

So, the speed of a tournament dramatically alters the experience, but there are pros and cons to each. Let’s breakdown the three components of tournament speed.

The tournament structure refers to the starting stack size, size of the blinds and antes and their increases, the level durations and the frequency and duration of breaks. The tournament host determines the structure of each event in advance.

Each event within a series will have a different structure. Usually the main event is the slowest, and hyper turbos are the fastest (actually flip-outs are even faster, but perhaps not considered poker), with every other event somewhere in between.

The speed is determined by the starting stack size, the size of the blinds and antes for each level and also by the time duration of each level.

The tournament host determines the tournament structures and publishes them in the player booklet or on their website. Sometimes they’ll have a hardcopy available at the event.

Can a tournament structure change speed during the event?

Yes! The speed is the rate at which players bust out on average. A structure can be designed to bust players more quickly at different stages. This is done by how much the blinds and antes go up at each stage. For example, the structure might have mild increases in blinds and antes in later stages to slow down the tournament which will allow for more deeper stack play when only a few tables remain or at the final table. The justification is the pay jumps are large, and players want more chips and time to apply their skills, rather than push-fold style play.

You might think a shot-clock makes a tournament faster because people need to act faster. This is an interesting twist on tournament speed.

Dealers have a big influence on the speed of gameplay. Some dealers are very fast with shuffling, dealing, announcing, counting and urging players along. Other dealers are very casual. A faster dealer means faster gameplay. Imagine a super fast dealer, playing say 20% more hands than average.

Also, efficient floor staff speed up the play, especially in how quickly they resolve issues, reassign seating and break tables.

Obviously, having sufficient tables, chairs and dealers in a single location improves gameplay speed. But so does having a card shuffling machine or using two decks simultaneously. Other infrastructure matters are the chips. Gameplay is faster when chips are distributed and collared up on the denominations proportional to the betting requirements. Also, easy-to-read chips speed up counting by players and dealers and improve gameplay speed.

Which is better? Fast or slow?

Each person has their own preference (just like for lots of things), and there are plenty of choices available. In my opinion, a variety of options for players is best and any aspect of the game the increases enjoyment for the players or the staff is a plus for tournament poker.

By far the most significant factor for tournament speed is the structure. Each tournament organizer has different speeds for each of their events, and there is no industry standard (sadly).

Here I compare the speeds of the main event structures from various tours in Asia, with comparisons to the huge main event at WSOP Las Vegas..

How is the comparison done? I’ve used tournament structure data from player booklets of recent events. The graph shows the M-value of a starting stack as time progresses assuming no hands are played and all blinds lost.

That is, the vertical axis indicates the M-value of a starting stack. The M-value is the stack size divided by the cost to play an orbit, which is small blind plus big blind plus ante(s). M-value is like measuring big blinds, but more accurately reflects the stack depth because it takes antes into account. The horizontal axis is hour elapsed. 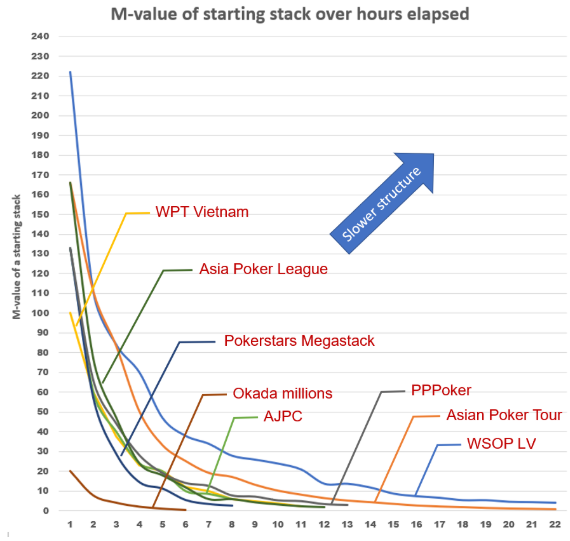 My guess is that each player has a personal preference for different structures. Some might appreciate the full immersive marathon-style of the WSOP, whereas other players can’t afford that kind of time at the table and prefer a 2-day event only. So, the variety available in the Asian market means there is something for everyone.